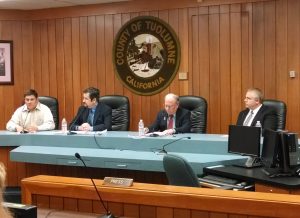 Sonora, CA — The community had a chance to hear from the candidates for office at the Tuolumne County Chamber of Commerce’s Candidates Night.

The candidates for Sonora City Council are Mark Ferreira, Jim Garaventa, George Segarini and Matt Hawkins. The candidates were asked about their top priorities. Ferreira said it was to improve the city’s infrastructure, including water and sewer lines. He said it will take outside of the box thinking. Garaventa said it was to make sure there is a strong diversified economy, including traditional family wage jobs, and those that bring in tourist dollars. He also noted problems with the transient population near Courthouse Park, and he would like to find solutions to address that issue.  Segarini said the city’s top priority should be to have a seat at the table when it comes to collaborative efforts related to water. He also touted his business background and ability to balance budgets.  Hawkins said the top priority is to lead the Vision Sonora effort. He also spoke about the need for more business friendly legislation, and trying to find ways to keep young families in the city.

In the Supervisor District Two race, incumbent Randy Hanvelt said economic development is the key issue in the county right now. He also voiced concerns about the impacts that AB-109 will continue to have on the county, and the need to encourage the federal government to make changes regarding forest management to prevent future Rim Fire type events.

The challenger, Paul McNaul spoke about his desire to bring back more mining jobs in the county. He also said the county needs to collaborate with the federal government when it comes to removing dying trees. He also proposed to find a way to rebuild the burned down Back to the Future III movie set, and turn it into a theme park that connects to Railtown.

Dambacher spoke about his success in both the private and public sector, and his unique ability to appraise all types of properties. He said top priorities are to expedite the process and ensure that the reassessment of property goes as smoothly as possible. Dambacher has 28 years in the appraisal field.

Deutsch spoke about her 15 years of experience in the County Assessors Office. 10 years she has spent as an Assessment Process Manager. She said her top priorities are to continue the process of moving to a virtually paperless office, and work to do cross-training among staff.

Whitman talked about his desire to help create incentives for retirees, exempt certain small businesses, and fight against identify theft.  He noted that he is endorsed by the retiring County Assessor, Ken Caetano.

The event was moderated by Chamber of Commerce Executive Director Mike Ayala, and questions were asked by Chamber Directors Margaret Davis and Wendy Gast. It was held in the Tuolumne County Supervisors meeting room.