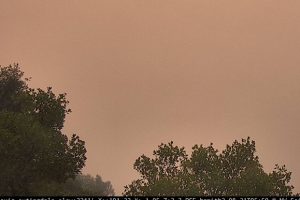 Update at 11:50 a.m.:  A map displaying properties that have been destroyed or damaged by the Caldor Fire has been released by the El Dorado County Sheriff and CAL Fire. Noting that this process is NOT complete and is ongoing, they detail that the map includes a list of damaged and destroyed structures provided by CAL FIRE’s Damage Inspection Teams.
Damage inspections, including locations, are preliminary and numerous sites still require confirmation, according to fire officials. They advise that CAL Fire Damage Inspection Teams are working as quickly as possible to supply the needed information to those that were or have been evacuated.

The house icons on the map indicate the current known status of structures. The map will be updated every day at
9 a.m.  Click here for the map.

There is still zero containment with the flames gobbling up another 6,599 acres to reach a total of 82,444 scorched this morning. Incident Command reports that the fire remained active in all areas overnight with short-range spotting and rollout continuing to increase the fire perimeter. Winds decreased during the evening hours and returned to a Southerly flow allowing for continued growth in the Northeastern areas of the fire. They added, “Due to very dry receptive fuel beds, the vegetation is igniting easily throughout the fire area. The increase of relative humidity allowed for firing operations to help strengthen control and containment lines.”

Mandatory Evacuation orders in El Dorado and a warning in Amador County remain in effect. Yesterday, authorities closed down a 46-mile stretch of Highway 50, the main route between Sacramento and Lake Tahoe. Around 15,000 structures are threatened with 245 already destroyed and 13 damaged. There have been two civilians seriously injured, as earlier reported here.