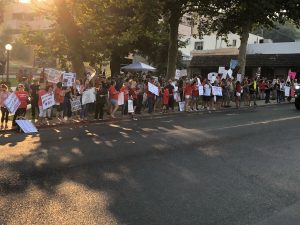 Update at 6 p.m.:  Clarke Broadcasting contacted Mayor Hawkins regarding his statement concerning the anti-vaccine mandate “Freedom Rally” at Courthouse Park in Sonora where a fight broke out and two were arrested, as detail along with his entire statement below. He had this response as to why he felt the need to put out the statement.  “Several reasons, one I want to reassure the public, not just in Sonora but Tuolumne County in general that their first amendment rights will be protected,” stated Hawkins, adding, “Also, that violence will not be tolerated.  You come to Sonora violence will not be tolerated period.”

The Mayor further detailed that he had been approached by several people that were not in support of the police department’s handling of the arrest of counter-protestors, 30-year-old Sabina Alexander D. Tischler, and 61-year-old Thomas Tishler, both of Sonora. He also shared, “There were several comments on social media that I observed and was shown by members of our community that basically stated going further than just doing alternate protests. The problem is now people are naming names and their naming where people are living that kind of thing. It needs to be well understood that not only in our city and in our county do we support our law enforcement, but that random or targeted acts of violence will not be tolerated period.”

As earlier reported, the scuffle broke out at the rally against COVID vaccine mandates with several of the protestors tackling a counter-protestor, 30-year-old Sabina (Suh-BEE-nuh) Alexander D. Tischler of Sonora, and holding him down until police could arrive. One of those restraining, Tishler was District Three Supervisor Anaiah Kirk, as detailed here. Sonora Police also reported that a “shank-like” weapon was found by Tishler.

“As incidents of violence and unrest are on the rise across the nation, we feel it’s more important than ever to support our local police. The profession is being demoralized, and peace officers are leaving their jobs due to constant scrutiny from the media and their communities. We rely on them for their service so that the rest of us can go about our daily routines with relatively little concern for our safety.

Increasingly, people are quick to judge and cast accusations, which only further aggravates the situation. In addition, we know there are many moving parts to the criminal enforcement process and a great deal of information gathering that cannot be publicly shared.

The Chief of Police works closely with City Administration and consistently strives to ensure the Police Department operates in a manner that reflects our values and the community’s needs. That being said, we trust that our law enforcement will continue to thoroughly investigate this recent event and ensure a fair and appropriate application of the law for everyone involved. We also trust that if additional information is discovered during the investigation, appropriate measures will be taken to modify charges or policy violations.”

The other person arrested at the scene was 61-year-old Thomas Tishler for obstructing an officer after attempting to leave the area with potential evidence and then resisting arrest. The younger Tischler was booked for felony assault with a deadly weapon and possession of a concealed dirk or dagger.