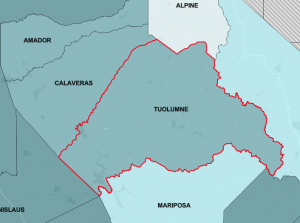 The US Census stats indicate that Tuolumne County’s population grew to 55,620 as of April 1st of last year. The year prior, in April of 2019, the population was estimated to be 54,478. 10 years ago the population was 55,368. Looking at Tuolumne County’s demographics, 79-percent identify as white, 12-percent as Hispanic, nearly two percent are multiple races and 2.3-percent are American Indian.  The average median household income is $60,108, the average travel time to work is 27 minutes, 90-percent are high school graduates, 20-percent have a bachelor’s degree or higher, and 82-percent have a broadband internet subscription. 11-percent are considered to be living in poverty.

Meanwhile, Calaveras County saw a slight decline in population, according to the figures. In April of last year, the population was 45,292 compared to 45,905 in 2019. 10 years ago it was 45,578. The demographics are nearly identical to Tuolumne County. However, the average travel time to work is 38-minutes and the median income is $63,158. 12-percent are considered to be living in poverty.