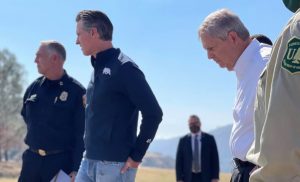 Citing the severe drought, the US Forest Service says it will change its current approach to suppressing wildfires.

Temporarily, the US Forest Service will no longer allow fires to burn for resource benefit and will implement full suppression tactics over the immediate period.

The change has been called for by lawmakers ranging from Congressman Tom McClintock to Governor Gavin Newsom. On the US House floor last week, McClintock compared monitoring wildfires to keeping an eye on a rattlesnake that is in your room. “It is dangerous nonsense,” he stated.

The concerning health and overgrowth of US Forest Service land was discussed yesterday when Governor Newsom, US Agriculture Secretary Tom Vilsack and new US Forest Service Chief Randy Moore toured the damage from last year’s August Complex Fire in the Mendocino National Forest.

Newsom said the state and federal governments are, for the first time, working together and planning mutual projects to improve the health of the federal forestland.

Ag Secretary Vilsack indicated that there is a big push to put a heavy amount of forest funding into the federal infrastructure bill being formed in Washington, DC.

Adding, “Candidly, I think it is fair to say that over the generations, and over the decades, we have tried to do this job on the cheap…the reality is that this has caught up with us, and which is why we have an extraordinary number of catastrophic fires.”

A regional fire that quickly grew on Forest Service land, after being monitored for several days, is the 68,000 acre Tamarack Fire that started last month in Alpine County and crossed into Nevada.