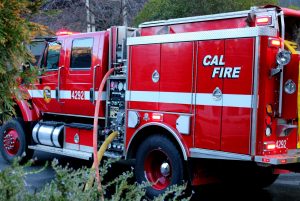 Update at 3:55 p.m.: CAL Fire reports the flames forward spread has been stopped at one acre on the Goodwin Fire near the La Grange Rodeo Grounds, off Highway 132 in Stanislaus County. A small ground crew will remain working to gain full containment and then mop up for a couple of hours. The cause of the fire remains under investigation.

Update at 3:35 p.m.: CAL Fire details that the Goodwin Fire has grown to one acre in size, but it is holding steady at this time. They add that fighters are marking good progress as it was difficult for ground crews to reach as the terrain is rugged.

CAL Fire reports the fire is a half-acre and burning in grass and brush. It has been named the GoodwinFire. Firefighters on the ground are having a hard time reaching the flames due to the rough terrain, but aircraft are dumping water on the blaze, according to CAL Fire dispatch. No structures are threatened. An update will be provided as soon as more information comes into the newsroom.