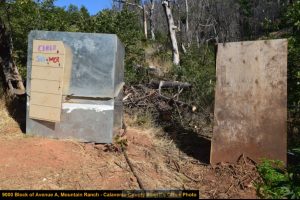 Hazardous conditions at the bust site

Mountain Ranch, CA – A literal stinker of a bust in Calaveras County as a raid on an illegal grow uncovered a “pit of human waste.”

The sheriff’s Office Marijuana Enforcement Unit on Thursday (June 17) conducted a search on two adjoining addresses in the 9000 block of Avenue A in Mountain Ranch. When the unit arrived, ten people were found living in primitive conditions at the site. It was clear by the stench that there were environmental issues, with deputies discovering a pit of human waste draining directly into the ground and an improvised shower, as pictured in the image box. Sheriff’s officials detailed that these structures were within 20-30 feet of a natural water drainage leading into a large pond, as shown in this map.

There was also plenty of marijuana and other drugs uncovered including 1,055 growing marijuana plants, 341 pounds of processed marijuana, various amounts of cocaine, codeine, ecstasy, psilocybin mushrooms, concentrated marijuana or “hash”, and methamphetamine. Much of the pot had been processed and packaged to sell. Investigators estimated the marijuana alone exceeds an estimated $2,000,000 in worth.

Six suspects were arrested, none from the local area. Some had ID’s while others revealed they had traveled from several different countries, including Spain, Argentina, and Chile. They ranged in ages from 26 to 37 years old.

Anyone suspecting an illegal grow should contact the Sheriff’s Office Anonymous Marijuana Tip Line at (209) 754-6870.

Another raid reported earlier this week also involved a disgusting find by the marijuana enforcement unit, as detailed here.