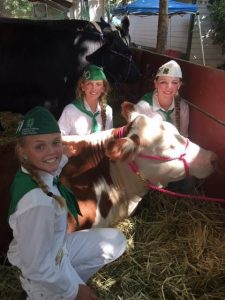 Sonora, CA – With under two weeks to go before the Mother Lode Fair, organizers are working on making a major change.

The plan is to switch back to a live Junior Livestock Auction after earlier this year announcing it would be done virtually due to coronavirus pandemic restrictions, as reported here. The about-face comes as this week Governor Gavin Newsom and the California Occupational Safety and Health Administration (Cal OSHA) ended most social distancing and mask rules for people who are vaccinated against the virus.

Ron Hamilton, V.P. of the fair board of directors, noted that the community has expressed concern and passion for a live animal auction, but says the main reason for the push to go live is for the kids. He added, “In the past year and a half they have had to do so many things online, like school. To give them something that is live and in-person would be awfully nice!”

Possible plans are already being formulated to cover all concerns including the safety and welfare of patrons and exhibitors. The fair board will have to approve any plans to make the switch. Hamilton says at their next meeting on Wednesday (June 23) Kim Helmbold, the Fair Livestock Superintendent will make recommendations on how to make the switch to a live auction and meet any criteria required by CAL OSHA. He did not have any specifics as that plan is still being worked out.

Besides the kids, another group excited about the possible change according to Hamilton, “The buyers wanting this for the kids. They support it and they’re going to do their best to make it happen.”

It may seem like a tall order with under two weeks to go until the fair opens, which Hamilton acknowledges, “It’s going to detail a lot of changes, but it is doable. We have a great group of volunteers with 4H and FFA. We’re pretty confident that it can happen in a week.”

The Mother Lode Fair is July 1-4 with the live auction on the 3rd.