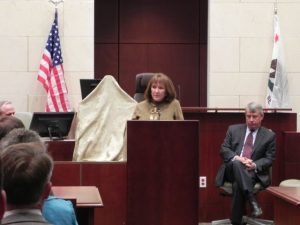 Retired Judge Douglas V. Mewhinney was credited as being the driving voice for a new Calaveras Courthouse. He sited safety as his main reason for wanting the new courthouse.  He described a situation where a two year old child and her mother were at a court clerk’s office window when a shackled inmate was walked directly by them on his way to court. Judge Mewhinney credited the Calaveras County Sheriff’s office and court bailiff for their excellent service in protecting the public. He said he was thankful that there were no incidents over the years of transporting inmates through the public hallways and office areas.

Calaveras County Board of Supervisors Chair, Merita Callaway says, “This has been a long time coming. The courts used to be part of the county and now they are a part of the state, but this is a county court. When I consider how we have gone, walking in the hallway next to inmates, Judge Mewhinney is right. This is a much safer facility. It is exciting, and in 50 years we will still be proud of this building.”

Presiding Calaveras Superiors Court Judge John E. Martin says, “The fact that we have video feeds from this courtroom into Department Three and into the jury room is certainly unprecedented for Calaveras County. I, for one am going to have to get used to this.” He was asked when that feature would be used and Hon. Martin said, “I can conceive of a case where you have a lot of public interest and you can’t get everyone into the courtroom. So we could, in theory, broadcast it into the courtroom next door.”

James Robertson, Court Technology Analyst says they have a standard business internet connection, a T1 interface. They have the ability to do audio conferencing and video conferencing, and that means they can do jail arraignments, virtually. Inmates will not have to come over to the courthouse but can appear before a judge from the jail via video.

Robertson says “There are quite a few other courts that are using this technology now. For some of the courts they have such a high flow that they run [inmates] in a line. …It will actually speed up that process considerably.”

Robertson says Department Three has media van access. With one video camera a video feed from the courtroom can be put out to the parking lot that news vans can connect to and rebroadcast. In addition the courthouse now has Digital Evidence Presentation (DEP) carts with computers, annotation pad, and DVD players. Lawyers can present video and other evidence to a jury and highlight important information digitally. The information can also be brought back to the jury room for review. Robertson says, “This is all brand new technology to the court. The only thing they used to have was electronic recording instead of actual court reporters typing everything”

The Courthouse is 44,600 square feet and has four courtrooms. The construction was managed by McCarthy Building Companies Inc. a national company with offices in Roseville. The new courthouse features an expansive entrance plaza, a two-story glass lobby and great hall, and natural light throughout the building. The facility’s sustainability features, such as a solar array on the roof and a green rooftop terrace, qualify the project for a LEED certification by the U.S. Green Building Council.

The Courthouse will be open for operation on November 25th. The new address is 400 Government Center Drive, San Andreas, CA 95249

Next to the new Courthouse, work continues on the new jail and sheriff’s office. There is a tunnel connecting the jail and the courthouse but until the jail is complete, deputies will have to transport prisoners from the old jail to the new courthouse. Delays in the jail’s construction prevented all the facilities from opening at the same time. Sheriff Gary Kuntz reported today they anticipate a January opening for those facilities.

The project is several months behind schedule. The related news story “No Lockdown On Jail Opening” is here.

As seen in the photos the new jail has no exterior windows, it has space for 160 beds with natural light provided by skylights. The total budget for the jail project was $56 million, paid for with a mix of state AB 900 funds and local tax dollars.