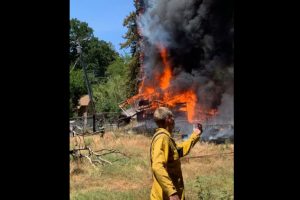 Sonora, CA – Sonora Police have released new information regarding the Dane Fire in downtown Sonora over the Memorial Day weekend, including a possible cause.

The Dane Fire was called out as a structure fire that spread to nearby vegetation on a property in the 20400 block of Columbia Way near Dane Lane in downtown Sonora on Sunday around noon, as reported here. After receiving several 911 calls, officers raced to the scene and found a fire burning in an open field towards Dane Lane and Highway 49. While the exact cause remains under investigation, Sonora Police signal the cause may be due to barbecuing, resulting in improper disposal of ashes.

“Based off of witness statements and clues at the scene led us to an area where there appeared to be ashes disposed of,” detailed SPD spokesperson Thomas Brickley.

During the fire, officers worked to evacuate nearby residences and direct traffic in the area. Air and ground fire resources were able to stop the flames forward rate of spread in about an hour and it was contained at half an acre. The structure burned in the blaze was an outbuilding, but the flames came extremely close to the backside of Sonora Customs Cycles shop on the highway.

“It came within 30 feet,” recounted officer Brickley. “That was actually just a little bit of a spot fire where an ember came up and over and caught fire there.”

Luckily, there were no injuries reported and Brickley added that the fire had the potential to be much worse had it not been for the quick, joint fire suppression efforts of all involved, including Sonora City Fire, CAL Fire, and Tuolumne County Fire.