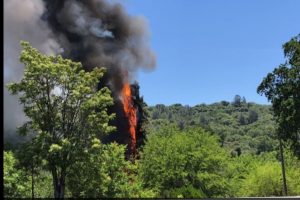 Update at 1:30 p.m.: CAL Fire reports all evacuations have been lifted as the forward rate of spread has been stopped for the half-acre grass fire named the “Dane Incident” burning along Columbia Way.  Highway 49/North Washington Street has reopened to traffic, but Columbia Way is shut down between the highway and Leonard Addition Way.  No injuries were reported in the fire.

The fire started in a structure, but what type remains unknown, on property in the 20400 block of Columbia Way near Dane Lane. The flames came very close to the back of the  Sonora Customs Cycles shop along the highway and across from the AM/PM gas station on Pesce Way. Crews will continue to work for full containment and mop up into the afternoon. What ignited the blaze is under investigation.

Update at 12:50 p.m.: CAL Fire reports the structure fire that spread to nearby grass along Columbia Way near Dane Lane in downtown Sonora has shut down a section of the northbound lane of Highway 49 at that intersection. CHP officers are directing traffic on the southbound lane.

Structures are threatened on the north side of the highway and the Mill Garden Apartments have been evacuated. There is no word on what type of structure was burned, but the vegetation is estimated at a half-acre in size. However, CAL Fire dispatch reports that crews are making progress as all incoming resources have been canceled. We’ll provide more details as soon as new information comes into the newsroom.

Original post at 12:25 p.m.: Sonora, CA — CAL Fire reports ground and air resources are responding to the downtown Sonora area for a structure fire where the flames have spread to nearby vegetation. Structures are threatened and the Mill Garden Apartments along North Washington Street/Highway 49 is being evacuated. It is unclear what type of structure is on fire. The blaze broke out in the 20400 block of Columbia Way near Dane Lane.

The vegetation fire is a half-acre in size. The CHP is closing down Highway 49 at Columbia Way to the City limits.  In the skies are two tankers and a helicopter from Columbia. The public is being asked to stay out of the area. More details will be provided as soon as new details come into the newsroom.