Yard Equipment To Blame For Quail Fire In Copperopolis 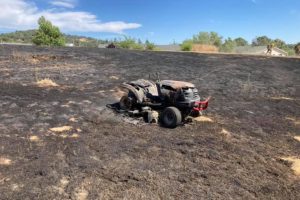 Quail Fire in Copperopolis determined to be an equipment sparked blaze

Copperopolis, CA – CAL Fire investigators did not have to look hard to determine what sparked Wednesday’s vegetation fire in the Copperopolis area of Calaveras County.

The picture in the image box of the charred mower and grass is more than enough proof. CAL Fire’s official wording for the cause is “unsafe use of equipment.” The flames broke out in the 1900 block of Quail Hill Road near Little John Road in the Copper Cove Subdivision, west of O’Byrnes Ferry Road, as originally reported here.

CAL Fire spokesperson Emily Kilgore tells Clarke Broadcasting this incident highlights several issues when it comes to lawn equipment. The first one; using the right tool for the job. “A riding lawn mower or a brush hog or even a push behind mower, those are really intended for manicured lawns, not the native grasses we tend to see in the foothills,” details Kilgore. “The appropriate choice for that would be a weed eater. Avoid using any blade on it. Only use string weed eaters.” The second problem was timing as this fire was sparked around 2:30 p.m. “Anytime community members are using gas-powered equipment, anything that can create a spark can create a devastating fire,” advised Kilgore, adding, “So, we suggest that people use that equipment before 10 a.m. and it always needs to have a spark arrestor.”

Since the beginning of this year, Kilgore recounts, “We have seen some fires that have ignited due to equipment use. The other part of equipment uses also includes grinding and welding operations and we’ve seen fires due to those as well.” CAL Fire also recommends that it is imperative when using yard equipment to also check it periodically for debris build-up near the motor, exhaust, and blade decks and to remove rocks from the work area.

To support these safety instructions, Kilgore gave this sobering message, “Historically, in the Tuolumne-Calaveras Unit, the second to third highest cause of fire ignitions in the unit is from unsafe equipment use. It varies from year to year going back and forth between vehicle ignited fires and equipment use, as being the second and third cause.”