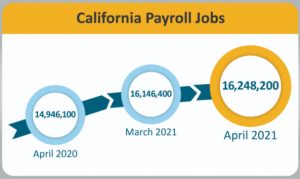 Sonora, CA – The Mother Lodes April unemployment rate continues to inch downward, lower than the state’s, which its numbers are being heralded for fueling the nation’s recovery.

California’s unemployment rate remained at 8.3 percent in April as the state’s employers gained more than 100,000 jobs for the third consecutive month. The increase was part of the month’s data released by the California Employment Development Department (EDD) on Friday. California has now regained 1.3 million jobs or 48% of the 2.7 million it lost in March and April of 2020. It is also fueling the nation’s recovery.

“California is continuing to lead the nation’s economic recovery, adding 101,800 jobs in April – 38 percent of all the jobs created throughout the entire country,” reported Governor Gavin Newsom.

The Mother Lode’s rates were lower than the states with Tuolumne County’s declined from 8.3% in March to 7.8% last month. Calaveras also dropped from 6.3% to 5.9% in April.

More than 60% of the job gains came from hotels, restaurants and entertainment venues. Although that sector remains down more than 500,000 jobs since the pandemic began as it was the most adversely impacted the governor’s previous statewide stay-at-home order. Newsom is pledging to lift most of the rules on June 15, as reported here. Experts believe that sector will fuel the state’s job growth over the next few months as more businesses reopen.

Despite those job gains, California still has the second-highest unemployment rate in the country at 8.3%, trailing Hawaii. However, the data also shows 33,600 people started looking for work again in California. Experts say that is a good sign.

A new spending package being negotiated by the governor and state legislators would pump billions of dollars in aid to individuals and small businesses over the next year. Newsom touted, “Over the past three months, California has created 390,300 jobs. But we’re not letting up, the California Comeback Plan is the biggest economic recovery package in the state’s history and will provide historic investments in small businesses and workers to bring California roaring back.”

The nation’s April unemployment was lower than the state and Mother Lode at 6.1%.