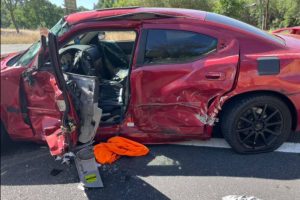 Jamestown, CA – Drunk driver to blame for a sports car versus semi crash on Highway 108 in Jamestown that stalled traffic for about an hour.

One person was flown from the collision scene this morning in the nine o’clock hour at the Mill Villa Road intersection. The CHP reports that 56-year-old Scott Mahoney of Jamestown was driving a Dodge Charger northbound on Mill Villa Road towards the highway. Eastbound was 60-year-old Anthony Forret of Murphys behind the wheel of his 2017 Peter Built truck. It was hauling a “piggy-backed” logging trailer at about 45-50 miles per hour.

“Mahoney failed to stop at the posted stop sign and traveled directly into the path of Forret’s vehicle,” stated CHP spokesperson Steve Machado. He continued, “As a result, the right front of Forret’s vehicle crashed into the left side of Mahoney’s vehicle. Mahoney sustained major injuries and was flown to Memorial Medical Center for treatment.”

Forret was not hurt in the crash. Machado added, “It was determined that Mahoney was driving while under the influence of an alcoholic beverage and placed under arrest.”

It took tow crews about 50 minutes to clear the wreckage and debris from the highway.