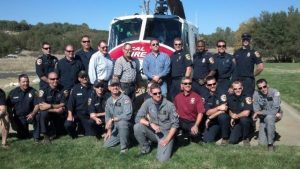 Senator Tom Berryhill is hoping to bring a number of lawmakers to Tuolumne County to see the devastation caused by the Rim Fire.

This week Berryhill received an aerial tour of the Rim Fire with Democratic Assemblyman Adam Gray of Merced, Tuolumne County Supervisor Randy Hanvelt and members of CAL Fire. Berryhill says he hopes to bring lawmakers from the Bay Area soon after the legislature returns to session. Berryhill says “seeing is believing” when it comes to the devastation done to the landscape and endangered species habitat. “I want to get some folks on the ground so that they can see managed areas, versus non-managed areas, and see the difference it makes,” he added.

During the tour, Berryhill says he was happy to see companies like Sierra Pacific Industries actively removing dead trees before the winter season. On the federal land, Berryhill says he is very concerned that rules and potential lawsuits will prevent most of the dead trees from being removed from the federal forest land. “I think the clock is going to run out and that timber is just going to sit there,” he says. “When we don’t thin that, and when we don’t take that fuel out of the forest, it eventually falls over and becomes the base for the next big fire that occurs in 30 years.”

There is roughly a year to a year and a half window to remove the downed timber before it is no longer useable.