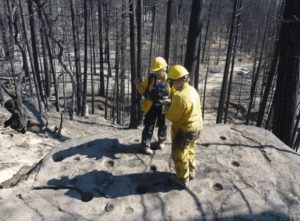 Sonora, CA — The first step for the team making emergency repairs in the Stanislaus National Forest is to remove downed trees from 227 miles of primary roads.

The team still needs to stabilize the severely damaged soils to reduce sediment during the winter months, remove floatable debris from channels, and replace culverts so that they can handle the higher flows expected from severely burned watersheds. The team will be in the Forest for the next several weeks, or as long as the weather permits.

The team is also working to re-establish route markers on roads, and install gates and warning signs. The team stated at this week’s Board of Supervisors meeting that they will try to employ as many local contractors as possible to assist with the recovery efforts.
The Stanislaus National Forest recently received over $4 million for BAER team recovery efforts, and Yosemite National Park received about $500k.

The Rim Fire is still listed as 92% contained and full containment is expected by Sunday. 196 firefighters are on scene.