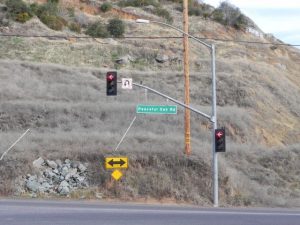 East Sonora, CA — A two car accident is causing more traffic headaches on Highway 108. The CHP reports a Jeep and another vehicle got into a fender bender at the intersection of Highway 108 and Soulsbyville Road. Luckily no one was injured in the crash, but it caused traffic to back up in both directions.


Just before three this afternoon the CHP reported traffic was backed up for miles in both directions near the Highway 108 Bypass construction area. Caltrans crews are working on a stretch from Cavalieri Road to Draper Mine Road all this week from 7:30am to 3pm. The CHP says the one-way traffic control caused traffic jams for two miles in each direction once afternoon commuters hit the roadway. It took more than an hour for traffic to start moving in the area after that and now the CHP says traffic is at a standstill again.

Update 5:15pm: The CHP reports no one was injured in the crash. Traffic is still slow going.

Update 5:30pm: The CHP reports traffic is still slow with about a 10 mintue delay time.