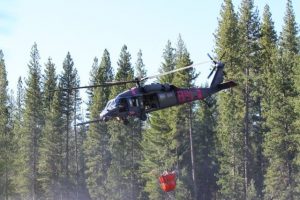 As of this morning, the fire is estimated to be 187,466 acres and its 23% contained. According to the Rim Fire Incident Command, last night firefighters conducted a burning operation from Paper Cabin Ridge down to the Tuolumne River, and south from Duckwall Mountain to Skidmore.

Crews secured fireline around spot fires in Reynolds Creek and dozers worked on constructing fireline north from Duckwall Mountain towards Fahey Meadow. In the southern part of the fire, crews secured the line near Pilot Ridge and near the border of Yosemite National Park. For today if conditions allow, crews are expected to begin a large burning operation from Hetch Hetchy Reservoir south to Tioga Road in Yosemite National Park in an effort to stop the spread of the fire to the east, as well as a burning operation from Highway 120 to Pilot Peak.

An advisory evacuation notice remains in effect for the south side of the Highway 108 corridor from Soulsbyville to Pinecrest. It also includes Tuolumne City, Ponderosa Hills and Willow Springs.
A mandatory evacuation order still remains for residences north of Old Yosemite Road (Forest Road 2S01). Highway 120 at the Yosemite National Park boundary west to Buck Meadows has been evacuated.

An Evacuation Warning has been issued for all residences north of Bull Creek Road (Forest Road 2S02), Bondurant Mine Road, Texas Hill Road, and Wampum Hill. An evacuation center is located at the Mother Lode Fairgrounds in Sonora.

4,191 firefighters remain on scene this morning.