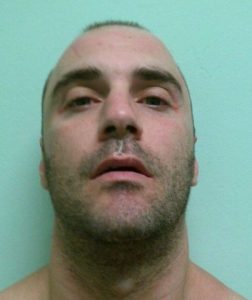 Sonora, CA — Armed with a chain and padlock a man tried to rob the Country Quick gas station on the 300 block of Stockton Rd. When officers arrived on the scene at 2:04 this afternoon, they spotted 36-year-old Dustin Freitas carrying a large chain with a padlock attached to the end of it. They say Freitas told them “I just tried to rob the store.”

Freitas was arrested outside the store. A records check showed that Freitas was on parole out of Calaveras County for felony battery with serious bodily injury. Freitas was charged with felony robbery, burglary, vandalism and parole violation.

Sonora Police say the damage to the register is estimated at over $5,000.