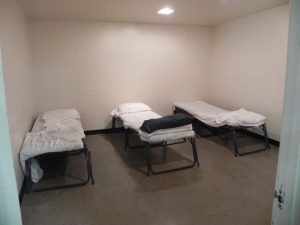 Sonora, CA — The Mother Lode Fairgrounds is the only shelter open tonight. Tracie Riggs of the Tuolumne County Office of Emergency Services reports the Mariposa County Shelter in Greeley Hill was closed at two this afternoon.

Riggs says, “There was no one there so it was closed. However, we are prepared. We have cots and food ready if it needs to open again.”

This afternoon Tuolumne County Sherriff’s Officials began Advisory Evacuations for the Pine Mountain Lake area which has nearly 3,000 residents. Red Cross Officials at the fairgrounds say they are ready for more evacuees who may arrive throughout the night. In fact, their numbers have almost doubled to 21 from before the PML advisory.

Red Cross Spokesperson Jordan Scott says, ‘We are here to give evacuees a place to sleep, get cleaned up, eat and just be comfortable.”

The shelter has received donations of water, food, toiletries and towels from some area businesses and restaurants.

We caught up with Linda Emerson who brought in donations. “Since I’m not directly affected by the fire. I wanted to make sure to aid those who have been.”

Red Cross Officials say if you want to donate the best thing to do is go on their website and donate cash that way they can purchase what they need.

As for pets, Tuolumne County Animal Control is kenneling animals. They can coordinate places for livestock to go. You can call them at 209-694-2730. Also, the Sherriff’s Posse Fairgrounds are taking in horses. You will need to bring your own water bucket and feed. Temporary pens can be hooked up to the arena as well. You can call 209-532-8269 or 209-559-1323.

Other areas under the evacuation notice include:

Officials have put in place a reverse 911 system to notify residents that are under an evacuation advisory. The 911 dispatchers are getting flooded with calls from people in the region. The county has set up a hotline for people that want to call in with questions, at 533-5174.

A size update on the Rim Fire by the Forest Service is expected later tonight. The evacuation advisory for Pine Mountain Lake will continue until further notice.

*The Red Cross initially stated that RVs would be charged less but the Mother Lode Fair Grounds is charging full price.