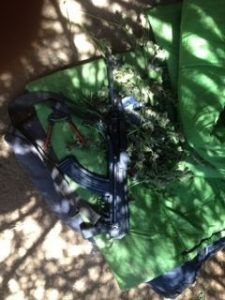 A total of 16,055 marijuana plants were located and destroyed, according to the Tuolumne County Sheriff’s Office. Officials report that evidence was found in all of the gardens indicating that the grows were maintained by Mexican Drug Cartels. Officials point out that an AK-47 rifle and a 30 round magazine were located at one of the locations.

The three day raid was carried out by the Tuolumne Narcotics Team, with assistance from Sheriff’s Office personnel, the US Forest Service, Bureau of Land Management, Fish and Game, State Parole, Sonora Police, and CAMP (Campaign Against Marijuana Planting). Eradication efforts will continue in Tuolumne County through the end of October. The marijuana gardens were located on public lands.