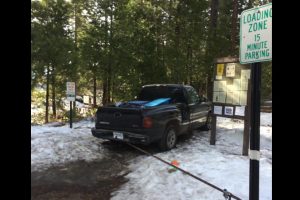 Pinecrest, CA – An abandoned pickup truck found at the gate of the Highway 108 Sno-Park last Friday afternoon ignited a search, but the Bakersfield driver’s whereabouts are still unknown.

As first reported here by Clarke Broadcasting, 31-year-old Eduardo Martinez Perez’s pickup pictured in the image box photos appeared to have become stuck at the gate of the Sno-Park and when Tuolumne County Sheriff’s Deputies arrived on the scene, they discovered items belonging to him outside the vehicle.

Perez’s was reported to be heading to Montana, according to sheriff’s officials. Once again, they are turning to the public in hopes that someone may have seen Perez on that day or since and have information on his whereabouts. Any tips or leads can be given to the sheriff’s dispatch center at (209)533-5815.