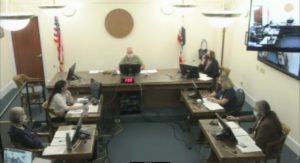 Sonora, CA — Last night the Sonora City Council voted to revise the agreement it has with the Hazy Bulldog Farms on Mono Way so that the business can sell recreational adult-use marijuana in addition to medical cannabis.

The item was discussed for over an hour. The city earlier expanded its marijuana program to allow up to three businesses to sell recreational cannabis in certain zones (downtown district not included). The change is anticipated to bring the city around $300,000 annually in new revenue. Hazy Bulldog Farms is the first business approved by the council. The vote was 5-0.

There were many concerns brought up in public comment about expanding the availability of the drug and the negative impacts it can have on youth in the community. Councilmembers noted that legal delivery services are already bringing marijuana into the county from the outside, and indicated that having local agreements in place is the preferred way to regulate and tax the industry.