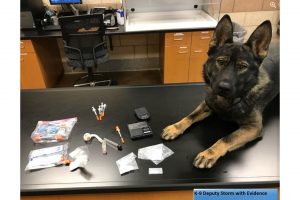 Drugs sniffed out by K9 Storm

Valley Springs, CA – Two separate arrests on the same day in Valley Springs netted a combined nearly 50 grams of methamphetamine and 90,000 in bail.

The first arrest occurred around 12:40 p.m. last Thursday when a vehicle went speeding by, while also crossing the double-yellow lines, a Calaveras County Sheriff’s deputy patrolling the downtown area. The driver, 46-year-old Jeremey Donald Sheets of Valley Springs took off when the deputy tried to pull him over, according to sheriff’s officials. Sheets then hit the brakes, jumped out of the vehicle, and ran up the driveway of a random residence. He was found hiding behind a fence.

During the investigation, deputies learned that Sheets attempted to conceal suspected contraband as he ran. Deputies found approximately 18.4 grams of methamphetamine, two smoking pipes and several credit cards that were issued to other people. While questioning witnesses, Sheets attempted to dissuade witnesses from giving incriminating evidence/testimony to the deputies.

That night, around 11 p.m., a suspicious vehicle parked at the Burson Post Office got the attention of a deputy patrolling with his K-9 partner Storm. Behind the wheel was 49-year-old Jennifer Erin Walker from Woodbridge, CA. A record check revealed she had a felony warrant for having dangerous drugs out of the Superior Court of San Joaquin County.

Subsequently, a search of her vehicle turned up 26.3 grams of methamphetamine. Walker was arrested without incident for possession of a controlled substance for sale and drug paraphernalia along with the warrant. Her bail was set at $55,000.