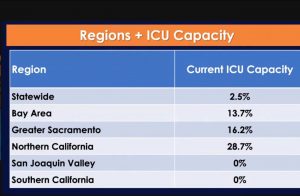 Sacramento, CA — The Stay at Home order for the San Joaquin Valley region is currently set to expire on December 28.

Governor Gavin Newsom addressed the issue during a noon press conference. The order for the region, which includes the Mother Lode, was originally expected to last only three weeks. Without elaborating, Newsom said,, “It’s likely, and pretty self-evident, that I’m going to need to extend those original dates.”

The Stay at Home order notably impacts operations for businesses such as restaurants, fitness centers, wineries and beauty salons, along with churches and worship centers.

Newsom says the same goes for Southern California, which was tentatively set to expire on December 30.

The Governor noted that the ICU capacity is at zero percent for those two regions. The Bay Area is at 13.7-percent, greater Sacramento is 16.2-percent, the upper stretches of Northern California is 28.7-percent and the statewide average is 2.5-percent.

On a more positive note, the seven-day average of new cases in the state is nearly 44,000, but on Sunday the number dropped to just under 38,000.

Newsom added, “We may be seeing a very modest decrease in the total case growth rate. It is still too early to tell, and sometimes the weekend numbers can lag. But, we’ll take a close look at this in the next few days.”

In addition, he said the initial doses of the Moderna vaccine, up to around 600,000 doses, will be arriving over the coming days, statewide.  More widespread distribution is anticipated in March or April.