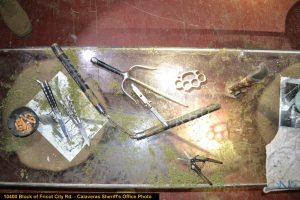 Drugs and weapons seized by CCSO

San Andreas, CA — One man was arrested after a raid on a San Andreas home exposed an illegal grow worth nearly $25,000.

The property located at 10400 block of Fricot City Road was searched by Calaveras County Sheriff’s Office Marijuana Enforcement Unit. Sheriff’s spokesperson Sgt. Greg Stark details, “Deputies seized 43 growing marijuana plants and 34 pounds of processed marijuana with an estimated value exceeding $24,000. Additionally, 7 firearms were seized.” He did not have any information on the types of guns found.

Arrested at the scene was 42-year-old Timothy Lanning of San Andreas for illegal marijuana cultivation, possession of marijuana for sale, and maintaining a premise for sales of a controlled substance.

Stark asks that anyone with knowledge of illegal marijuana operation call the Sheriff’s Office Anonymous Marijuana Tip Line at (209) 754-6870.