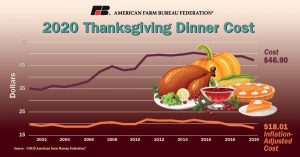 “The average cost of this year’s Thanksgiving dinner is the lowest since 2010,” said AFBF Chief Economist Dr. John Newton. “Pricing whole turkeys as ‘loss leaders’ to entice shoppers and move product is a strategy we’re seeing retailers use that’s increasingly common the closer we get to the holiday,” he explained.

The centerpiece on most Thanksgiving tables – the turkey – costs less than last year, at $19.39 for a 16-pound bird. That’s roughly $1.21 per pound, down 7% from last year. The survey results show that retail turkey prices are the lowest since 2010.

The shopping list for Farm Bureau’s informal survey includes turkey, stuffing, sweet potatoes, rolls with butter, peas, cranberries, a veggie tray, pumpkin pie with whipped cream, and coffee and milk, all in quantities sufficient to serve a family of 10 with plenty for leftovers.

In recognition of changes in Thanksgiving dinner traditions, the Farm Bureau price survey also includes ham, potatoes and frozen green beans. Adding these foods to the classic Thanksgiving menu increased the overall cost by $13.21, to $60.11. This updated basket of foods also declined slightly in price (4%) compared to 2019.

California Farm Bureau Federation released details on big shifts in demand. Demand for big turkeys is down 5% this year, while demand for bone-in and boneless turkey breasts is up 5%, said Bill Mattos, president of the California Poultry Federation. This could be an indication people are “trying to get a little less meat,” maybe because they’re having smaller groups to feed, he said. Turkeys weighing 12 to 18 pounds have been the most popular size, and Mattos said he does not expect that will change this year, as people often buy Thanksgiving turkeys anticipating leftovers.

Throughout the California food business, farmers and marketers have been trying to gauge changing demand for holiday-related items. The head of the California Poultry Federation says people have been buying more turkey breasts and fewer large turkeys, as they downsize holiday gatherings. If more people cook at home, demand for dairy products and other foods could change. Wine marketers say they expect a strong fourth quarter, as usual.

“I think we’re going to see brisk sales for the California bird no matter what, just because they always go first and we only can supply 35% of the consumption in California,” he said. “We don’t believe we will have a surplus of turkeys from California this year.”

Sales of wine and spirits typically rise during the last quarter of the year, said Tom Fantham, chief commercial officer for Napa County-based Trinchero Family Estates, and with the growth of in-home consumption this year, he said he doesn’t anticipate people will downsize their purchases this holiday season. People will still celebrate, he added, albeit in smaller gatherings or in their “bubble groups,” and they will continue to buy wine and spirits.

Recent trends in wine consumption appear to relate more to the pandemic and “our new normal rather than holiday shopping behavior,” Fantham noted.

“These are likely people that used to go out and spend money regularly in restaurants and are now spending more on wines they’re enjoying at home,” Fantham added.

With the state’s almond crop expected to top 3 billion pounds this year, Mike Briano, vice president of sales and marketing for Harris Woolf Almonds in Ballico, said almond prices have stayed at low-enough levels to allow buyers to continue using the nut in their products and to innovate with it. For this reason, almond marketers have seen “record months,” he said, adding he remains “bullish on the future of almonds and nuts in general.”

“The fear is everything is kind of in a standstill, but we haven’t seen that,” Briano said.

There have been some shifts in how and what people are buying. For example, some buyers who used to make larger purchases now buy only what they need so they don’t sit on product for which there might not be demand after the holidays, said Kevin Souza, Harris Woolf sales and marketing manager. More retailers are seeking larger-volume items as shoppers stock up, and that could drive demand during the next few months, especially if there’s a new wave of infections and people are shut up at home, Briano said.

“I think that’s probably one of the bigger reasons why people are grabbing so much supply and shipping numbers are up,” he added.