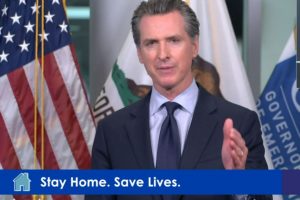 Sacramento, CA — Governor Gavin Newsom hints that a new executive order could be coming soon aimed at curbing the spread of COVID-19.

He acknowledges, “We are considering, full disclosure, a little bit of a preview, the notion of a curfew.”

Adding, “I have on my desk three studies from France, Germany and Saudi Arabia that have done comprehensive studies on the efficacy of their strategies as it relates to curfews.”

Newsom said Massachusetts already has a statewide curfew, and there is an alcohol-based one in Virginia.

He concluded, “We have a lot of questions about what it looks like and doesn’t look like, who does it impact and not impact, and what types of industries and businesses.”

Newsom did not indicate how soon the state could issue a curfew, but it appears he is moving in that direction.

It was reported earlier that Newsom has come under fire for not following some directives he put in place, including attending a birthday dinner, and mixing with other households, at the French Laundry restaurant in Napa Valley. He called his decision a “big mistake” and said he must practice what he preaches and set a proper example.