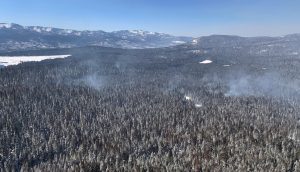 Fresno County, CA — Assisted by the recent weather, the incident command team reports that the Creek Fire is no longer growing, and suppression repair efforts around the incident should be completed by the end of the week.

The fire, which ignited on September 4 near Shaver Lake in Fresno County, and spread to parts of Madera County, is holding at 379,895 acres. It was responsible for heavy drift smoke in the Mother Lode throughout September and parts of October.

The latest Incident Command report states, “Demobilization of excess resources continues. Firefighters are regularly evaluating conditions in the Wilderness areas on the northern and northeastern edges of the fire. Some small fingers are smoldering in heavy fuels, but the area is under snow and little to no overall fire growth is anticipated. Windy conditions may cause a slight uptick in smoke production from those areas in advance of a storm front which is anticipated to pass through on Tuesday night or Wednesday morning.”

The cause of the fire remains under investigation. 335 firefighters are still assigned, including six engines, five hand crews, two helicopters and two water tenders. While the fire is no longer growing, officials are waiting for additional precipitation to fall before calling it officially contained.