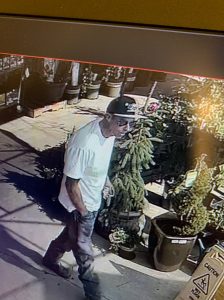 Sonora, CA – A vehicle stolen from an Angels Camp hardware store last week that was captured on security footage has been found in Sonora disguised by a new paint job.

The thief remains on the loose and can be seen pictured in the image box. Angels Camp Police did not give an exact location of where the stolen Dodge Durango was found, but say it turned up on Wednesday, October 28th. The SUV had been spray-painted and its battery had been yanked out. After being towed to a nearby yard and the owner was notified.

As originally reported here, the store’s security camera footage showed the suspect pull driving a Ford Crown Victoria pulled into the Calaveras Lumber parking lot on Highway 49. He cruised around the parking lot and drove off. Minutes later, the suspect returned on foot and stole the SUV.

Police disclosed that the Crown Victoria was also located but did not reveal where. The owner relayed that vehicle was not stolen. Police would not say what the relationship is between the owner and the suspect but note that the investigation is ongoing. Anyone with information is asked to contact the Angels Camp Police Department at (209)736-2567 or acpd@angelscamp.gov.