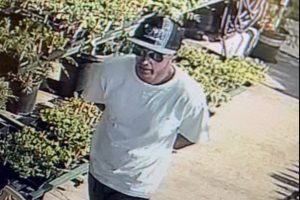 Angels Camp, CA – The man pictured in the image box is the suspect wanted for stealing a vehicle from a hardware store in Angels Camp.

Police report that around 2:13 p.m. today (Wednesday, Oct. 21) the suspect jumped into a 1998 Dodge Durango SUV in the parking lot of Calaveras Lumber and drove off. Police describe the stolen vehicle as white with California license plate 5PAC370. It also has a plate frame that reads, “I want to be Barbie, that (expletive) has everything.”

Officers viewed the store’s security camera footage and saw the suspect pull into the parking lot behind the wheel of a white 2000 Ford Crown Victoria with license plate 7UVE682. The driver then cruised around the parking lot and left. Minutes later, the suspect, now on foot, steals the SUV.

Angels Camp Police says investigators through DMV records have retrieved the name of the person records show owns the license plate on the Crown Victoria to contact them but did not relay whether officers have spoken to that person.  They ask that anyone who may recognize the suspect or the car or with information about this case contact the Angels Camp Police Department at (209) 736-2567, or acpd@angelscamp.gov.