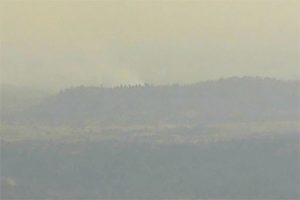 Fire along Highway 108 near Tulloch Road in Keystone area

Update at 5:04 p.m.: Spokesperson Emily Kilgore reports that crews have contained the Owl Fire at 2.7 acres. No structures were threatened and no injuries were reported.

The flames broke out in the 19600 block of Schell Road in the Knights Ferry area of Stanislaus County, north of the Stanislaus River. A small crew will remain mopping up for the next hour.

Update at 4:45 p.m.: CAL Fire has updated the location of the Owl Fire originally placed at Tulloch Road and Highway 108/120 in Tuolumne County.  Spokesperson Emily Kilgore reports it is located closer to Knights Ferry in the 19600 block of Schell Road in Stanislaus County, north of the Stanislaus River.  She adds now three acres in size and moving at a slow rate of spread. Crews are making good progress and responding resources have been canceled while Columbia aircraft have also been released from the scene.

Update at 4:20 p.m.:  CAL Fire has dubbed a blaze burning along Highway 108/120 in the Keystone area of Tuolumne County the “Owl Fire.” The flames broke out in some grass near Tulloch Road and it is two acres in size. CAL Fire reports that firefighters will be making access to the fire via Schell Road, north of the Stanislaus River.  More details will be relayed as soon as an update comes into the news center.

Original post at 4:05 p.m.: Keystone, CA — Columbia aircraft and ground crews are heading to a report of a vegetation fire in the Keystone area of Tuolumne County.

CAL Fire reports that it is in the vicinity of Highway 108/120 near Tulloch Road and Greensprings road. There is no word regarding the fires’ size, rate of spread, or whether any structures are threatened. An update will be provided as soon as new information comes into the newsroom.