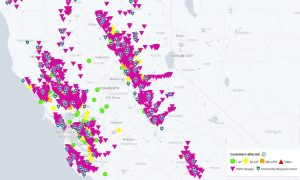 Update at 1pm: Power is being restored throughout some parts of the region this afternoon following the inspection of lines.  PG&E is sending updated notices for restoration times, based on the area. PG&E has indicated that some customers will be restored this afternoon, others possibly tomorrow, depending on the area.

Update at 12pm: More PG&E customers in the Mother Lode are receiving notices about power likely being restored this afternoon as the company has begun inspecting power lines. Some parts of Sonora could see power back on as early as one o’clock this afternoon, according to a notice sent out by the company. Others nearby are anticipated to receive power later this afternoon. It is not immediately clear how long it will take to fully restore power in the region. PG&E had earlier stated that some customers could be without power into late Tuesday.

Update at 11:17am: Some PG&E customers in Sonora have received a text message that the “weather has improved” and crews are out inspecting equipment in order to restore power.

Asked about the status of Tuolumne and Calaveras counties, PG&E spokesperson Brandi Merlo says at this point only Sonora has received the “weather all clear.”  It is not immediately known how many customers it includes, or how soon power could be restored. But, crews have begun inspecting some of the lines. We’ll pass along more information when it becomes available.

PG&E had earlier stated that some customers in the region could be without power through Tuesday evening.

Update at 10am:  PG&E officials relay that the company anticipates giving the weather “all-clear” in stages across the state, starting this morning, and continuing through late tomorrow. It remains unclear when Tuolumne and Calaveras counties will receive the all-clear. Tuolumne County has 30,327 customers without electricity and Calaveras County has 15,694. The power went out at around 4pm on Sunday.

PG&E spokesperson Brandi Merlo says once the weather “all-clear” is given, teams will begin inspecting lines, and when they deem it safe, restore power. We’ll pass along more information as it becomes available.

Original story posted at 6:21am: Sonora, CA — PG&E cut power to an estimated 361,000 customers in the state, including many in the Mother Lode, yesterday afternoon in an effort to protect its equipment during times of high wind.

30,327 customers are without electricity in Tuolumne County and 15,694 in Calaveras County.

The outages are anticipated to run until late Tuesday evening.

Click here to view the latest information from the National Weather Service.

Community Resource Centers are now open at the Elks Lodge in Sonora, the Mother Lode Fairgrounds in Sonora, Eproson Park in Twain Harte, and Mary Laveroni Park in Groveland, as well as Utica Park in Angels Camp, the Murphys Fire Station and Chapel of the Pines in Arnold. They have water and snacks, restrooms, wifi access and electronic charging stations.

Many schools are closed today due to the outages. Click here to find the latest information.