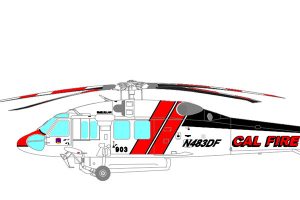 Sonora, CA — Those who missed seeing the new Firehawk helicopter flying overhead last week will get another chance to see it starting this week.

CAL Fire Tuolumne-Calaveras Unit (TCU) officials say another six days of pilot training has been added to the original schedule that had the helicopter flying training missions all last week, as reported here. Beginning on Thursday, Oct. 22, and running until Tuesday, Oct. 27th, pilots will be taking the bird up for the additional training.

The extra training will consist of multiple flights in and around the Columbia Airport, Calaveras County Airport, Pine Mountain Lake Airport, and the Arnold Heliport. The Firehawk will also be flying missions in and around the communities of Columbia, Jamestown, Sonora, Arnold, New Melones Reservoir, and Don Pedro Reservoir.

The new helicopter is being based at the Columbia Air Attack Base. CAL Fire Tuolumne-Calaveras Unit (TCU) officials call it a modern helicopter that “will be an important fire-fighting resource.” Click here to view an earlier article regarding the chopper.

Additionally, fire crew training for the Firehawk has been slated for November 2nd through the 13th.