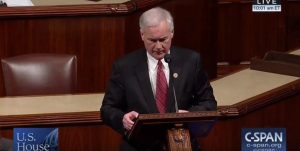 Congressman Tom McClintock recently spoke on the US House Floor about the Irwin County Detention Facility.

“My Chief of Staff is a former Naval Captain who commanded the aircraft carrier U.S.S. Constellation in the 1990’s. I once asked him what was the most important thing he learned during his distinguished naval career. He said, “The first reports are ALWAYS wrong.”

That’s why I would urge my friends on the other side of the aisle to take a step back and await investigations that are now underway to determine what actually happened at the Irwin County Detention Center, lest they appear in retrospect to have behaved, well, foolishly.

This resolution affirms allegations that women detained by ICE for the crime of illegally crossing the border, underwent unwanted, unnecessary medical procedures, including full or partial hysterectomies and other procedures involving their reproductive organs, performed without their knowledge or consent.

IF that is true, it is appalling and those responsible should be held accountable.

“The recent allegations by the independent contracted employee raise some very serious concerns that deserve to be investigated quickly and thoroughly. ICE welcomes the efforts of both the Office of Inspector General as well as the Department of Homeland Security’s parallel review. As a former prosecutor, individuals found to have violated our policies and procedures should be held accountable. If there is any truth to these allegations, it is my commitment to make the corrections necessary to ensure we continue to prioritize the health, welfare and safety of ICE detainees.”

Of course, this resolution makes no acknowledgement of Mr. Pham’s statement or of the investigations that are now underway.

The reality is, at this point, we do not have all the facts.

We know that the complaint by the group Project South, which instigated the allegations, did not contain testimony from a single woman who had a hysterectomy while detained at the Irwin County Detention Facility.

We know that ICE has an annual third-party inspection of its detention facilities, including the medical care at those facilities.

We know that ICE has Performance-Based National Detention Standards, which include high standards for women’s medical care.

We know that on September 18th, the Associated Press reported: “The AP’s review did not find evidence of mass hysterectomies as alleged in a widely shared complaint filed by a nurse at the detention center.”

We know that on Sept. 22nd, the Washington Post reported that since 2017, only TWO women in immigration custody were referred to the Irwin County Hospital for hysterectomies and that there are no other facilities in the region that perform that procedure. The attorney for the hospital calls the claims “demonstrably false.”

We know that on September 15th, the Washington post reported that the lawyer who filed the lawsuit on behalf of a pro-illegal immigration group, “acknowledged to The Washington Post that she did not speak to any women who had a forced sterilization, and said she included the allegations in the report with the intention of triggering an investigation into whether or not the claims were true.”

“Whether or not the claims were true.” Well, we’re going to find out. And once we have all the facts, we can make rational decisions about what to do.

But this resolution simply assumes the allegations are true and condemns the institution as if they were true. It then calls for indefinite postponement of the deportation of ANY illegal immigrant at this facility that has had ANY medical procedure, which I assume would include routine medical screenings.

Wouldn’t it be better to let the investigation take its course, have all the facts laid out before us, and then take the appropriate actions? If the allegations are true, every bit of the indignation expressed in the resolution and by my Democratic colleagues would be justified and a united, bipartisan Congress would demand and command redress and reform.

But if the allegations are found not to be true, this House, that is already plumbing the depths of public ridicule and derision, will once again have diminished its credibility and its moral authority to speak out on this or any other issue.”