Argument Over Money Erupted Into Gunfire In Twain Harte 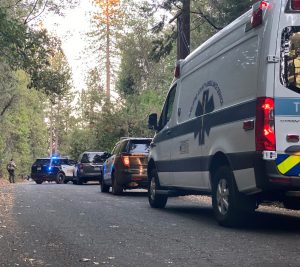 Scene of shooting in Twain Hart

As first reported here by Clarke Broadcasting, one person was shot in the 17800 block of Robin Road around 5 p.m., and the shooter was on the run.  Today, Tuolumne Sheriff’s officials detail that the shooting was a result of an argument over money involving several subjects, which turned physical and eventually erupted in gunfire. They add that the gun, a .38 Colt Revolver, has also been located.

Recounting the incident, sheriff’s officials relay that of the multiple calls received by dispatch, one caller stated that “the shooter walked up the driveway of a house, with a gun in hand, just after the shooting took place.” Investigators relay that the victim was shot in the arm. He “self-transported” himself to the nearby Twain Harte Fire Department and from there was taken by ambulance to an area hospital.

With a perimeter established around the shooting area, detectives were contacted by another person inside the house where the shooting was reported to have taken place, according to sheriff’s officials. They disclose that the man had “sustained head injuries not related to firearm use.” The second victim was also treated at the scene and then taken to an out of area hospital. Sheriff’s officials share that both individuals are expected to recover from their injuries.

While no arrests have been made in connection to this case, sheriff’s officials say all of those involved are accounted for and the investigation is ongoing. They add that no further information will be released at this time.