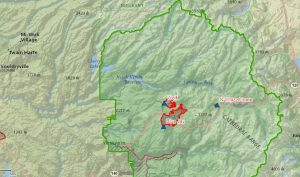 Yosemite, CA — There has been some additional growth on a lightning-caused fire in Yosemite National Park.

The Blue Jay Fire, near the Yosemite Creek drainage and south of 10 Lakes Trail, is 6,334 acres, and 50-percent contained. Yosemite officials report that it has been creeping and smoldering through pockets of debris and dead and dying trees. It is visible from Tioga Pass and has been moving to the north and northeast. No structures are considered threatened. The fire activity is described as “moderate.”

Meanwhile, a nearby Wolf Fire, also sparked by lighting, is 1,818 acres and 60-percent contained. It is burning in a similar type-terrain.

There is also an incident, being called the North Whizz Dome Fire, directly to the east. It has burned 138 acres and there is no containment. It was caused by lightning and discovered on August 27. It is mostly just being monitored at this point.