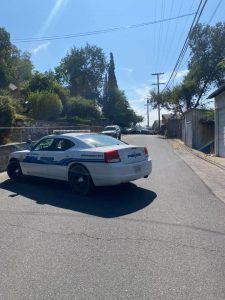 Update at 1:30 p.m.: Sonora police relay that North Stewart Street has reopened after a four-vehicle pile-up at the Elkin Street intersection. The roadway was shut down, between Elkin and E. Cowan streets,  for about half an hour as tow crews worked to remove the wreckage. Additionally, police are still searching for one of the drivers involved in the crash that fled the scene on foot. Further details are below. An update will be provided as soon as new information comes into the newsroom.

Original post at 12:55 p.m.: Sonora, CA — First responders are on the scene of a pile-up on North Stewart Street that has shut down a section of the roadway, and police searching for one the drivers.

Sonora Police detail that four vehicles are involved in the crash on North Stewart Street at the Elkin Street intersection. North Stewart is closed between Elkin and East Cowan Street. Police relay that one of the drivers took off on foot after the collision and is being sought.

Police dispatch describes him as a white male adult. He is wearing a blue baseball cap and a gray shirt and a white mask. He ran east on Elkin Street and then possibly southbound on Shepard Street, according to police. They add that he may have injuries but they do not know the extent of the injuries.  Anyone spotting him should not approach him but instead call Sonora Police Dept. at call police at 532-8141.