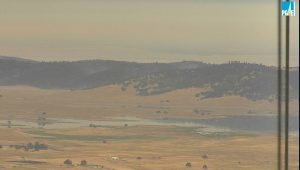 Update at 3:03 p.m.: Among the wildfires raging across the state, the Salt Fire is also contributing to drift smoke filling the Mother Lode skies.

CAL Fire officials report that with resources stretched due to multiple major fire incidents, there has not yet been an official update on acreage and containment today about the blaze burning in a remote area near Salt Springs Reservoir, but one will be issued this evening. That said, they state that fire crews are making really good progress and the flames are no longer a threat to the Diamond XX community.

So the latest numbers available still indicate the incident at 1,500 acres in size with ten percent containment.

BJ Hansen provided the update below.

Original Post at 7:13 a.m.: Copperopolis, CA — Some containment has been gained on the 1,500-acre Salt Fire in Calaveras County.

CAL Fire reports this morning that it is now 10-percent contained. It ignited late yesterday afternoon in a remote area near the Salt Springs Reservoir. No structures are considered threatened. The fire was moving yesterday at a rapid rate in a southeast direction.

Fire crews will be on scene for an extended period. Resources from the CAL FIre Tuolumne Calaveras Unit, and firefighters from out of the area, are working to fight the blaze. Click here to view a webcam aimed in the vicinity of the fire. We’ll continue to pass along more information as it becomes available.