Seven Rescued On The Stanislaus River 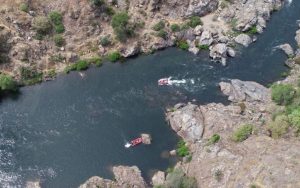 Rescue on the Stanislaus River

It happened shortly before three o’clock in the area of Goodwin Dam on the Stanislaus River.

The Modesto Fire Department was among the agencies responding, and reports, “A hiker reported a group yelling for help after losing their rafts and inner tubes in class IV rapids below the dam. A total of six adults and one minor were rescued.”

Thankfully, no injuries were reported and the rescue efforts lasted approximately three hours.

Goodwin Dam is located near the community of Knights Ferry in the area near Tulloch Dam Road outside of Jamestown.