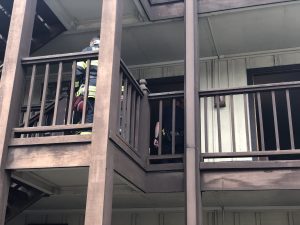 Sonora, CA – A report of an explosion sent police and local fire crews to Sonora’s Heritage Inn in the one o’clock hour.

When fire crews arrived, as seen in the video in the image box, the staff was evacuating guests from their rooms in the 49er Building on South Washington Street that also houses the front office. Firefighters raced to room 209 but found no flames. They remained for about 15 minutes checking to make sure any flames had not spread into the walls or nearby rooms.

Sonora Police report a woman was taken to the Adventist Health Sonora with burns to her arms. Inn staff disclosed to Clarke Broadcasting that the woman told them she was filling a butane lighter when her husband walked into the room with a lit cigarette, causing the explosion. The force blew her across the room and created a dent in the wall. We were not allowed into the room to take pictures.

After about 30 minutes fire crews left the scene while officers headed to the hospital to question the unidentified woman. The all-clear was given to allow guests to return to their rooms.