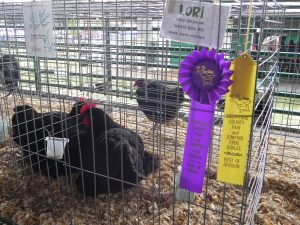 Sonora, CA – The Calaveras County Fair has canceled its Poultry Show for the second year in a row due to a bird disease that can kill entire flocks.

Virulent Newcastle Disease is a contagious and fatal viral disease affecting the respiratory, nervous and digestive systems of birds and poultry. The statement below was released by the fair board:

“Due to the continued outbreak of the Newcastle Disease, the Fair Board voted to cancel the 2020 Poultry Show. We will be enhancing Poultry Palooza and hope to make it as fun as it can be for our Poultry exhibitors.”

As earlier reported here, a recommendation to halt all poultry shows came last month from California State Veterinarian and Stanislaus County Fair officials took heed. Local fair boards including Calaveras and the Mother Lode were weighing their options. The latter’s fair board is expected to vote on whether to pull the plug on the show at its next meeting on Wednesday, Feb. 26th. held at the fairgrounds beginning at 5:30 p.m. The Mother Lode Fair runs July 2-5th and its theme is “Working Hands And Cattle Brands.”

The 2019 Calaveras County Fair & Jumping Frog Jubilee runs May 14-17. This year’s theme is “Frog Town Hoe Down” and the new logo below was created by Zac Calbert from Sonora. It was fashioned after the original drawing sent in by Steve Smith of Angels, which can be found in the image box. Calbert has designed the artwork for the last two years in a row.