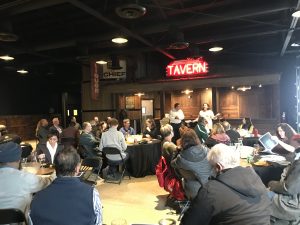 Sonora, CA — Local business leaders in Tuolumne County heard a presentation from an expert versed in the inner workings of the California Environmental Quality Act (CEQA).

Kathryn Oehlschlager, with Downey Brand LLP., based in San Francisco, was the keynote speaker at the monthly Tuolumne County Business Council Luncheon. She has represented municipalities like the City of Los Angeles to agricultural industry leaders fighting the state’s proposed twin tunnel water project. She gave an overview of the history of CEQA, which was originally passed in the 1970s as a way to ensure environmental concerns were being considered when approving projects. However, it has evolved into a tool to stop numerous development projects that groups or individuals find undesirable.

She cited CEQA as the main reason new housing is not being built in California, adding that the only projects that typically receive CEQA exemptions are major sports complexes.

She gave an overview of the various steps for approving projects through CEQA, including a negative declaration, mitigated negative declaration and an Environmental Impact Report. She also spoke about ways to reduce the risk of a lawsuit, such as determining if there is opposition, carefully evaluating the appropriate documents, mitigating properly and adequately responding to comments.

Oehlschlager adds that CEQA reforms are passed at the state capitol about once per decade, but they often bring little benefit to the business owner. She encouraged those in attendance to voice any concerns they may have to local state lawmakers.

Today’s Business Council luncheon was held at The Armory building on South Green Street in downtown Sonora that was developed by Doug Kennedy. It was a rare opportunity for the group of around 40 on hand to see inside the facility. At the beginning of the luncheon, Adam Wilson with Century 21 Wildwood properties spoke about the facility and noted that it is currently on the market for $4.45-million.