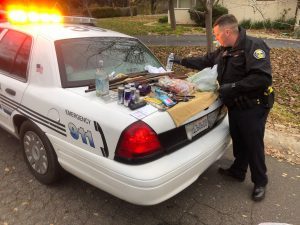 Sonora, CA — Thanks to a tip from the public, a man was arrested after being caught in the act of burglarizing a Sonora Restaurant.

The PD received a call at 7:30am yesterday that a suspicious-looking man was leaving Gus’s Steakhouse on Mono Way with a large container of items on a dolly. The caller followed the suspect until an officer arrived on scene. 30-year-old Luis Ramirez was stopped in the area of Fir Drive and Pine Street. An investigation determined that the items had been stolen from the restaurant. Ramirez allegedly took $300 in cash, firearms, knives, sports memorabilia and food. The combined value was over $5,000.

He also had burglary tools in his possession, and methamphetamine and heroin. Ramirez damaged the door by forcing entry inside.

The PD reports, “Thanks to the actions of an alert citizen, the private business owner was able to recover all of his stolen property. There will, however, be costs associated with the repair of the damaged door”

Ramirez was booked into Tuolumne County Jail on $25,000 bail.