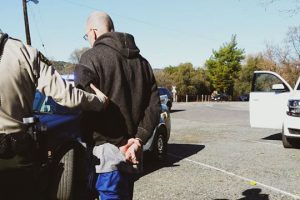 Jamestown, CA – Spying a passing vehicle with no registration sticker ends with a large meth bust.

While patrolling on Monday morning near Railtown 1897 State Historic Park in Jamestown, a Tuolumne County Sheriff’s Deputy pulled the untagged vehicle over. Inside the vehicle was the driver, 43-year-old Jeramie Gilreath of Modesto, along with two passengers, 58-year-old Randy Devine Sr. of Turlock and 40-year-old Storm Corral of Columbia.

A records check revealed that Corral had Post Release Community Supervision terms allowing for a search of the vehicle. Sheriff’s spokesperson Niccoli Sandelin relays that in a compartment on the passenger’s side of the vehicle the deputy discovered over 80 grams of methamphetamine and drug paraphernalia.

After questioning the suspects, it was determined that the drugs belonged to Gilreath, according to Sandelin, who advised that due to the continued investigation no further information can be released. He was taken into custody without incident for possession of a controlled substance for sales, transportation of a controlled substance for sales, and having drug paraphernalia. His bail was set at $40,000.