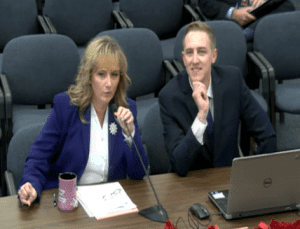 Sonora, CA — Tuolumne County Economic Development Director Cole Przybyla says he has reached out to 511 businesses and organizations during his first five months on the job.

This morning he gave his first quarterly report to the Board of Supervisors.

CAO Tracie Riggs led off the presentation by noting that this is a new department, and Przybyla was given the initial task of making himself known to local businesses. The first emphasis was business retention, followed by expansion and attraction.

Przybyla stated that some of the highlights have included working with Columbia College to see if there are additional ways to connect employers with workforce needs, helping the Mono Vista Shopping Center with a needed permit through the Community Development Department, and helping Revive Coffee with the idea of doing a parklet. He also made 11 business referrals and visits to the Twain Harte Shopping Center. There were 25 Community Development Department pre-application/applications he assisted with, including four hotels, three tourism projects, a bed and breakfast, an energy project and three natural resource projects.

He has been assisting Sierra Northern on a rail grant expansion that could benefit the area.

There are also plans in 2020 for events like a local funding summit and resiliency summit.

He noted that he has contacted over 100 out of county companies to let them know about Tuolumne County. They include the likes of Target, Aldi, Tesla, Home Depot, Dip Brazing Company and some craft breweries.

As far as statistics go, while the state is currently projecting the county’s population to grow by less than 1-percent over the next five years, there will soon be 22,852 residents retiring, which will open up new jobs.

During the public comment period, Ken Perkins, who filed a transparency lawsuit against the previous Tuolumne County Economic Development Authority, criticized the report for being “similar to what TCEDA sold,” and that there was no discussion about indicators of success, and what needs to be worked on. He feels the county is currently in a state of stagnation and will likely be in one for a period of time.

Local business owner Steve Campbell countered Perkins by stating the county should not be focusing on decline and spoke about the need to attract capital and increase housing. He praised Przybyla’s early efforts and stated that the issues raised against the earlier TCEDA were about transparency and oversight, but not the objectives it set forth.

In order to keep the current county services, Ron Kopf, of the Tuolumne County Business Council, added that there will either be increased economic development or increased costs placed on residents and tourists. He stressed the Importance of supporting local projects and housing communities that attract groups like millennials.

The supervisors thanked Przybyla for the presentation and early efforts, and all of the feedback from the members of the public. They also spoke about the need to move forward and leave former disputes surrounding TCEDA in the past.