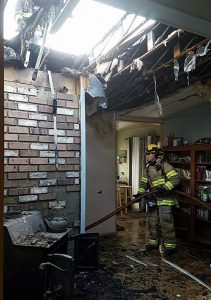 Soulsbyville, CA — Fire caused extensive damage to a residence in Soulsbyville over the weekend.

It ignited at around 10:15am on Saturday along Sturgis Road. Resources responded from Tuolumne County Fire, CAL Fire, Twain Harte Fire and the Mi Wuk Sugar Pine Fire Prevention District. The cause has not been released, but as you can see in one of the images, it did extensive damage to the roof. The American Red Cross responded to help a displaced family. Crews spent late morning and early afternoon mopping up the incident.