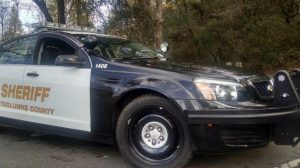 Sonora, CA – A local man on pre-trial release was jailed on fresh charges after allegedly attempting to burglarize a house of worship.

A records check of Eastman showed he was on searchable release and a subsequent search of the truck turned up just over three grams of methamphetamine, drug paraphernalia, and a concealed and loaded .32 caliber revolver handgun. Further investigation determined the loaded firearm belonged to Shaw, who did not have a conceal carry permit.