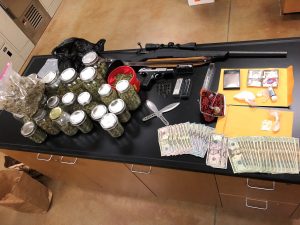 San Andreas, CA — The Calaveras County Sheriff’s Office arrested a 33-year-old San Andreas man who was found in possession of a stolen vehicle.

It happened in the 1000 block of Knief Lane. There was also a loaded 9mm handgun inside it. Deputies then decided to search the home of the suspect, Brian Dehart, because he was on probation. Inside they located 58 grams of meth, around four pounds of marijuana, a rifle, and evidence of selling the aforementioned drugs.

Dehart was booked into Calaveras County Jail on various charges.