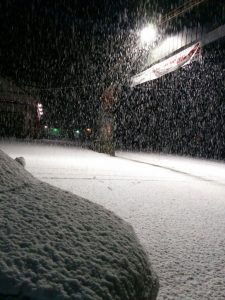 The Winter Storm Warning will remain in effect for the Sierra Nevada and the Mother Lode above 1,500 feet until 4 AM Friday.

Additional snow accumulations will range from two to six inches above the 1,500 foot elevation. Above the 3,000 foot elevation, an additional eight inches to a foot-and-a-half of snow is likely.

The total snow accumulations above the 2,000 foot elevation will range from half-a-foot to four feet. The higher you go, the more the snow.

Wind gusts of forty mph are expected at times in the Mother Lode. The winds could gust as high as sixty-five mph across the upper ridgetops and the crest of the Sierra.

Snow, combined with very strong winds, will significantly reduce visibility at times. Slick, snow-covered roads and potentially dangerous and treacherous driving conditions are to be expected. Blowing and drifting snow and local whiteout conditions are likely, along with sub zero wind chill temperatures in the higher elevations of the Sierra.

A Winter Storm Warning for snow means there will be snow covered roads and limited visibilities. Travel is not recommended while the Warning is in effect. If you must travel, keep an extra flashlight, carry tire chains, food, water and warm clothing in your vehicle in case of an emergency.